A swimming pool deck slip resistance standard is proposed that if adopted will cause hundreds of millions of dollars of misspent investment; lead to thousands of slip and fall accidents, many with life-changing injuries; cost hundreds of millions in medical bills and other losses; and lead to far too many premature deaths due to injuries such as broken hips, brain damage, etc. In the USA, numerous lawsuits would of course result. 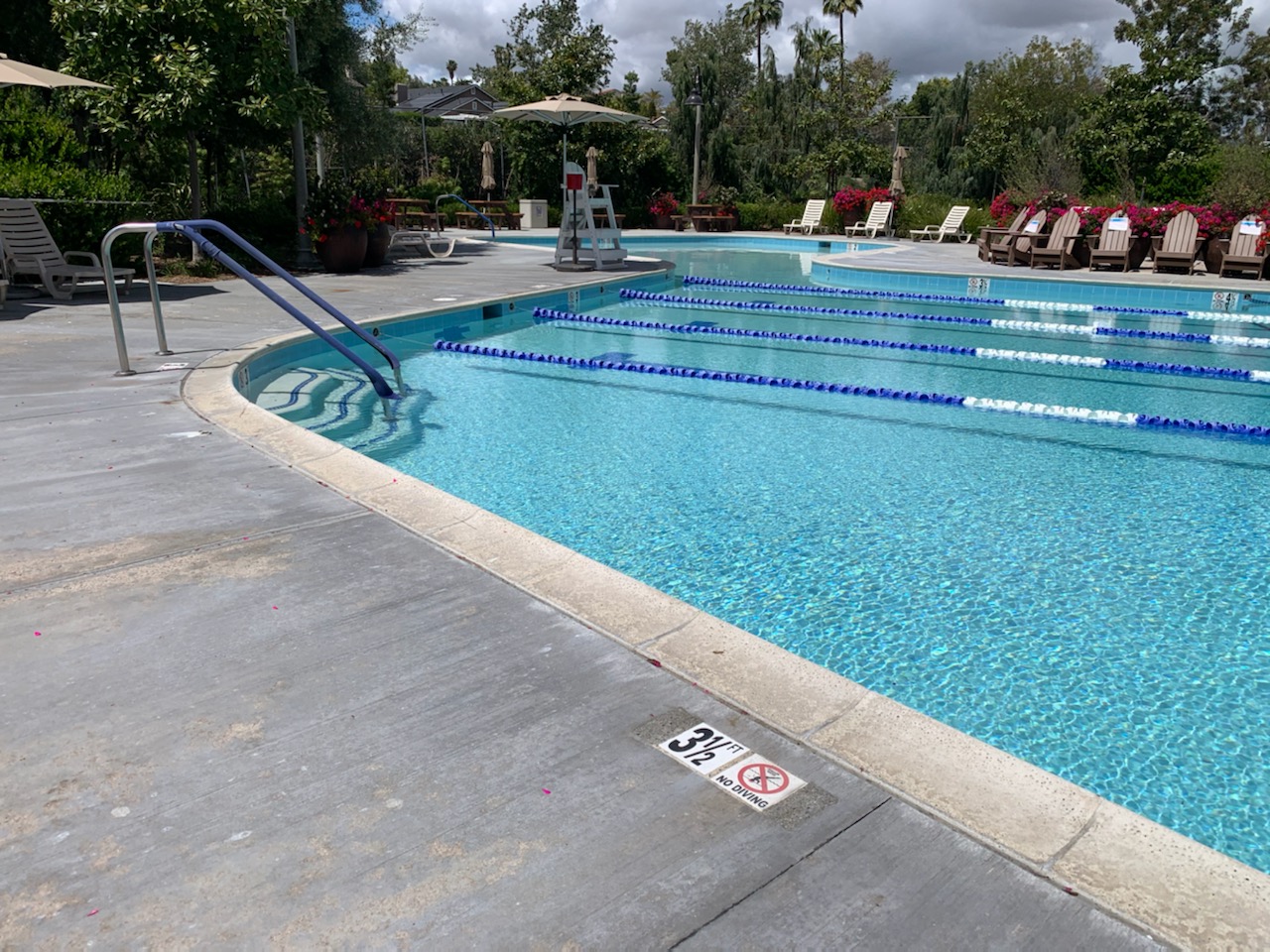 The proposed standard implies that slip safety is provided if the wet dynamic coefficient of friction (DCOF) of the deck is 0.42 or higher. The determination is made using a hard rubber slider to simulate the bare foot. This slider is in no way representative of the skin of a bare foot, which can deform and slide too easily over asperities intended to give the surface wet slip resistance.

The test method specified is ANSI A326.3, a newer version of the same test that is included in ANSI A137.1. (ANSI is the American National Standards Institute.) The Tile Council of North America (TCNA) went a very dangerous step further, and actually published a newer version of ANSI A326.3 in 2021, which says pool decks need a minimum DCOF of 0.50 or 0.55, depending on if it’s inside or outside. Get ready, lawyers and emergency room doctors! These minimum DCOF limits set a REALLY low bar and will allow many very slippery flooring materials to be installed as pool decks, causing way too many injurious and deadly accidents.

The draft pool deck standard is by IAPMO Codes Administration. IAPMO is the International Association of Plumbing and Mechanical Officials, which coordinates the development and adaptation of plumbing, mechanical, swimming pool and solar energy codes to meet the specific needs of individual jurisdictions both in the United States and abroad. It is located in Ontario, California USA.

Briefly, the standard establishes a very low bar for pool decks to be considered “slip-resistant.” The minimum DCOF is far too easy to meet for slippery flooring. This will result in consumers investing in pool deck surfaces that are unsafe. The standard evidently provides considerable legal protection for the manufacturer and vendor, but nothing for the buyer or the user of the pool deck. Unfair situations like this have been known to persist in the slip resistance field for many years. This standard will be great for the opioid industry as people get critically and/or permanently injured on pool decks installed using this poorly thought-out standard based on zero good science or research.

“Unless otherwise specified, tiles suitable for level interior spaces expected to be walked upon wet shall have a wet DCOF of 0.42 or greater when tested using SLS solution [that is, water with a trace of wetting agent] as per the procedure in Section 9.6.1. However, tiles with a DCOF of 0.42 or greater are not necessarily suitable for all projects. The specifier shall determine tiles appropriate for specific project conditions, considering by way of example, but not in limitation,

“… The presence on installed tiles of water, oil, grease, and/or any other elements which reduce traction, creates slippery conditions … Tile installations with exposure to such elements require extra caution in product selection, use, and maintenance. … When tested using SLS solution as per the procedure in Section 9.6.1, tiles with a wet DCOF of less than 0.42 shall only be installed when the surface will be kept dry when walked upon and proper safety procedures will be followed when cleaning the tiles.”

The standard gives no method of evaluating the six factors listed (type of use, traffic, etc.). So they’re saying you should just take a wild guess as to how much more than 0.42 you need for your particular situation.

We (Safety Direct America) recommend that the long-existing pendulum DCOF test described in the Australian standard AS/NZS 4586 be used to help account for the six factors. The standard recommends that flooring for the level parts of pool decks have a minimum Pendulum Test Value (PTV), wet, of 45 using a hard rubber slider and 40 using a soft rubber slider (these numbers cannot be converted to numbers gotten from the ANSI test) – it’s a different test method and results should not be considered interchangeable). For pool ramps and stairs leading to water, the minimums are 55 (hard rubber) and 45 (soft rubber). These standards have been in use since 1999 and to our knowledge have generated little controversy. They provide much more assurance of safety than the proposed, toothless IAPMO and TCNA standard. The latest American pendulum test ASTM E303-22 would apply now as well after it was updated in 2022 to ore closely resemble AS 4586.

The use of both hard and soft rubbers is appropriate in cases where street or dress shoes might be worn on the pool deck, e.g. for parties. High heels in particular have very hard surfaces at the tip of the heel.

The proposed IAPMO standard and published TCNA standard has no specification for walk-through pools, inclined pool surfaces, or stairs leading into the water. These carry higher slip risk than pool decks and presumably should have a more conservative slip resistance.

The standard established National Sanitation Foundation and National Standard of Canada in 2019 requires a wet Slip Resistance Value (SRV, the same as PTV) of 40 or greater. This is a much better alternative than the proposed IAPMO standard.