Contact John at 949-933-6071 for field or laboratory British pendulum (or ASTM E303-22) DCOF floor slip resistance or road skid resistance tests. Turnaround time for lab tests is normally two-three working days, and the charge for most samples is $230.00 per sample (a sample is one to three representative pieces of the same material). Field test charges are for time and expenses from southern California. We can also annually calibrate your British pendulum in our laboratory (see bottom of page for details). As a validation of our expertise in pendulum calibration (and operation) an international study has found us to be one of the world’s top three pendulum labs for accuracy.

The British pendulum is the most accepted pedestrian slip resistance test method worldwide. The test is well-proven and long backed by an ASTM (American Society for Testing and Materials) standard that was validated in 1971 by 3500 test results on walking surfaces obtained over more than 25 years. The pendulum received the highest rating for correlation with human traction in a peer-reviewed published scientific study of 11 types of tribometers (friction meters) by the University of Southern California Medical Center. 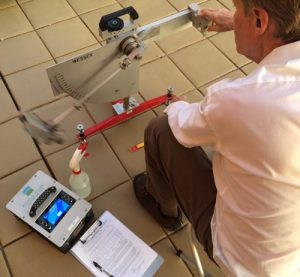 The world’s best and most sophisticated safety standards and the test method to go with them are in Australian Standards HB198. There are situation-specific safety standards for Pendulum Test Value (PTV) for more than 27 specific situations. Recommended minimum wet PTV’s range from 12 (for dry areas) to 55 (swimming pool ramps and stairs leading to water.) We recommend using these standards to supplement the rudimentary minimum of 0.42 wet dynamic coefficient of friction in ANSI A137.1 and ANSI A326.3, incorporated by reference in the International Building Code. Those minimums do not protect the building owner from liability, since it requires that the user consider numerous other factors. We recommend using HB198 to allow for those factors.

The method for pedestrian slip resistance testing and road skid resistance testing in the United States is described in the newly-revised ASTM E303-22, the “Standard Test Method for Measuring Surface Frictional Properties Using the British Pendulum Tester”. Data on precision and bias relevant to human traction are available for that method, as a precision statement is included in E303. Some of the bias data are in an ASTM Publication: STP 1424, pp. 112-136. Greater London Council Bulletins 43 and 145 contain validating information dating from publication in 1971 and 1985. The safety criterion specified in those bulletins has become a standard in the United Kingdom, Australia, Dubai, Malta, New Zealand, Singapore, Spain, and other countries that follow British law, and has been in use continuously, with the same numerical safety criteria, since 1971.

As ASTM E303-93 was updated in 2022, it now more closely mirrors other pendulum test methods from around the world, such as AS 4663 and EN 16165. We can now use the ASTM E303 test method to measure both the slip resistance of floors and the skid resistance of roads using the same test method with the pendulum slip resistance tester. The harder Four S rubber (Standard Shoe Sole Simulating) is most commonly used when testing floors, and the softer TRL rubber (Transport & Road Laboratories) is usually used for road skid testing, although the softer rubber is also used for testing floors that will be used by barefoot pedestrians. The ASTM E303 test method now has greater precision and is much more reliable and useful with the new 2022 improvements to the test method, and so we can reliably now use the floor slip resistance testing safety criteria used in other countries with America’s version of the pendulum DCOF test.

Here’s a video of the pendulum DCOF tester in action:

The pendulum test method and its safety standard have these advantages:

The British pendulum dynamic coefficient of friction (DCOF) test method is the national standard for pedestrian slip resistance in at least 50 nations on five continents. This includes:

The pendulum method has been endorsed by Ceramic Tile Institute of America since 2001. It is also used for indoor and (by ASTM Specification F 2157 – 09) outdoor sports surfaces. The National Sanitation Foundation (NSF), together with American National Standards Institute (ANSI) and National Standard of Canada (CAN) established a slip resistance standard for recreational water facilities, including splash pads and water parks. Formalized in NSF/ANSI/CAN 50 – 2019, the standard requires a wet Slip Resistance Value, SRV, of 40 or greater, measured using the pendulum slip resistance test method. Other ASTM test methods for wet slip resistance are obsolete and include no safety standards. The pendulum DCOF tester is also used in AASHTO T 278 in the USA. Click here for more information on the C1028-07 test method, which is NOT endorsed by the ADA and is not appropriate for assessing pedestrian slip risk.

Percy A. Sigler at the U.S. National Bureau of Standards developed the pendulum method specifically for assessment of pedestrian traction potential, publishing his results in 1948. Minor modifications to ASTM E 303-93 (2013) and safety standards for pedestrian traction are specified by the United Kingdom Slip Resistance Group in their 2011 publication “The Assessment of Floor Slip Resistance: The UK Slip Resistance Group Guidelines (Issue 4)”. This group (ukslipresistance.org.uk) has members in the UK, USA, and Australia who contributed to the fine-tuning of the guidelines based on experience with the method. Two members of the committee represent the British Governments Health and Safety Executive.

Please click on British Pendulum Calibration Services for more information and to pay online for your pendulum tester to be calibrated in the USA today. 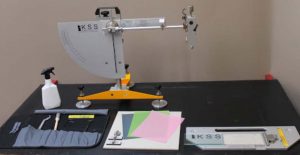 The pendulum slip resistance tester is presently used for measuring pedestrian slip resistance in at least 50 nations on five continents. This pendulum DCOF test device (sometimes called the British Pendulum) is endorsed by the Ceramic Tile Institute of America and has an American test method for its use – ASTM E303. It’s also used to assess slip risk all over Europe with BS EN 16165:2021, in Australia and New Zealand with AS 4586 and AS 4663, and plenty of other test methods in various nations around the globe. We recommend the pendulum for the most reliable results in assessing real-world slip risk based on 50 years of international research. Perfect for lab and field testing. It’s also used to measure the skid resistance of roads using ASTM E303-22.
$5880.00 (delivered to you within the lower 48 states)