The newly revised and updated ASTM E303-93 (2022) is a test method to determine the slip resistance of a flooring surface or the skid resistance of a road surface using the pendulum DCOF tester (sometimes called the British Pendulum Tester). The official title of the test method is “ASTM E303-22 – Standard Test Method for Measuring Surface Frictional Properties Using the British Pendulum Tester”. The original test method ASTM E303-93 was first published in 1993. That means the pendulum tester was shown to have precision and reproducibility between slip resistance testing labs 30 years ago. The usefulness and precision of pendulum DCOF slip resistance and skid resistance testing has just continued to be improved and verified over and over again over the decades, as it has been in use in well over 50 nations around the world for over 50 years now, which has led to safety criteria for ASTM E303 and other pendulum slip resistance test results.

The latest version of the American test method ASTM E303 was published in 2022. The test method now more closely mirrors the pendulum slip resistance test methods used across Europe, in the United Kingdom, Australia, New Zealand, Singapore, and other nations that have been using the pendulum slip resistance test device for decades. The pendulum DCOF tester is easily the world’s most widely-accepted and trusted tribometer for measuring the frictional properties of a surface to assess safety, both in the lab and in the field.

There have been numerous research studies done in many countries over the decades using the pendulum skid tester. Now the ASTM E303 slip resistance test results will more closely mirror results gotten by the corresponding pendulum test methods presently used in the European Union (EN 16165, which superseded EN 13036), the United Kingdom (BS EN 16165, which superseded BS 7976), Australia and New Zealand (AS 4663, AS 4586), and other test methods from Singapore, Israel, and numerous other nations. The pendulum test methods around the world are becoming more and more uniform with this latest published version of ASTM E303 and BS EN 16165, which allows for even further international research studies to be conducted to validate the usefulness and accuracy of the pendulum DCOF slip resistance tester to assess the real-world slip resistance of floors and road surfaces.

The video below shows the pendulum DCOF tester in action doing the ASTM E303-22 test method:

Floor slip resistance test methods in the USA have historically, and continue to mostly be, published using very little or no actual slip and fall research, and they were created to help sell slippery flooring in the United States, or help wealthy building owners win the slip and fall lawsuits brought against them when they install polished, slippery floors that cause injuries. With this latest version of ASTM E303-22, the United States now has a reliable and trustworthy slip resistance test method for the use of assessing the actual slipperiness of floors.

This is a big moment for American floor slip resistance testing, after numerous useless and highly misleading test methods were withdrawn or allowed to expire over the decades, which were the cause of great confusion, such as ASTM C1028 (withdrawn), ANSI/NFSI B101.1 (expired), ANSI/NFSI B101.3 (expired), ASTM F1677 (withdrawn, for Brungraber Mark II, which is for all intents and purposes identical to a Brungraber Mark IIIB), ASTM F1679 (withdrawn, for English XL VIT), ASTM F1678 (withdrawn), ASTM F609 (withdrawn), and on and on and on. These test methods only helped to create the slips and falls that help unscrupulous full-time expert witnesses make their well-paid living in American courtrooms. For the slip and fall “expert”, it’s often not the truth that matters, but what data they can come up with that “sounds official” and will convince a jury.

For the test methods created by representatives of the tile industry, such as ASTM C1028 and ANSI A326.3, the goal is and was to help sell slippery tile, and then defend building owners who have installed it and soon find themselves defending their slippery floors in court.

ASTM E303-22 changes all that, and creates an American slip resistance test method for floors backed by 50 years of research and internationally-accepted science, and safety criteria to help Americans interpret ASTM E303 test results. Now architects, building owners, specifiers and flooring manufacturers can make informed decisions based on science to help avoid slip and fall accidents, which are never fun to defend.

In the United States, ASTM standards don’t come with safety guidelines or recommendations (they’re just test methods), and the Americans with Disabilities Act (ADA) says floors should be “slip resistant”, but doesn’t define what that means, OSHA gives guidance based on meaningless misinformation they digested, and usually building codes are vague, misinformed, and change every few years. So Americans have been left to guess a flooring’s slip resistance, or ask the tile manufacturer what tiles are appropriate for areas that must be slip resistant. That’s often like asking a used car salesman if the old junker you’re looking at will keep reliably running for decades. He’ll tell you whatever will get you to pull out your wallet. But luckily the international floor slip resistance testing community has been working on safety guidelines for decades using the British Pendulum Tester.

According to the United Kingdom’s Health and Safety Executive (HSE), the Ceramic Tile Institute of America (CTIOA), and the United Kingdom Slip Resistance Group (of which our John C. Sotter is contributing member), level floors that have a Pendulum Test Value (PTV) or British Pendulum Number (BPN) below 25 are considered “high slip potential”, flooring with a PTV between 25 and 35 are considered “moderate slip potential”, and level floors with a PTV above 36 are considered “low slip potential.” For floors with a slope (ramps and floors that need drainage, for instance), a mathematical calculation is used to account for the degree of slope, and then added to these minimum safety criteria numbers.

The Health and Safety Laboratory in conjunction with the UKSRG has deemed a minimum value of 36 PTV is required to satisfy the HSE and the courts in a civil or criminal personal accident claim action in the United Kingdom. In the USA, we don’t have a DCOF or PTV value that means a flooring is “safe”. We just wait until an injury occurs, and then everyone gets a payday! The lawyers, doctors, “expert” witnesses, judges, people who will replace the floor or put an anti-slip treatment on it, etc., etc.

PTV and BPN can be converted to dynamic coefficient of friction (DCOF) numbers, and sometimes you’ll see DCOF numbers in reports either instead of or as well as a PTV. There is a chart at the bottom of this page with PTV to DCOF conversions, for reference.

Based on the Australian Safety Codes and Guidelines in HB198:2014, different flooring areas will require different levels of slip resistance. Here are their recommendations for minimum pendulum DCOF slip resistance test values for various areas (click on chart below to open it up):

One number missing from these recommendations is for bathtubs and showers in the home and in hotels. These are high-risk areas where a fall can lead to the head colliding with a faucet or the side of the tub, or a person falling through a glass enclosure. So many serious injuries and deaths are recorded annually from tub and shower slip accidents that it’s easy to see why we recommend that the flooring in these high-risk areas have a low slip potential, or a minimum PTV of 36.

From the Transport and Road Research Laboratory in the United Kingdom, we get these recommendations for various roadway situations (click on the photos to open them up in a bigger format). The recommended safety criteria and interpretations of results for ASTM E303 road testing shown below are in DCOF, as opposed to pendulum test values (PTV). The next section will have PTV to DCOF conversions, for reference. These values were first published in 1970. Click on the photos below to open them up larger in a new window.

For reference, here are some conversions of PTV to DCOF. It should be noted that DCOF numbers generated by the pendulum test do not in any way correspond to a safety criterion from another test method. Using the BOT-3000E and ANSI A326.3, the safety criterion is generally a DCOF of 0.42 for indoor, level floors. For the now-withdrawn ASTM C1028, it was 0.60 SCOF. Numbers obtained from one test method cannot be converted into becoming relevant for another test method, especially when one test is an SCOF test and the other is a DCOF test. Don’t be fooled by “experts” who pretend there is a “universal slip resistance test number (or slip index) that is considered safe.” That’s either a lie, or a profound misunderstanding of how science works.

Each test method will have its own safety criterion (hopefully different criteria for different situations, as pool decks should have more slip resistance than hotel lobbies) based on slip and fall research, and there is no “golden number” that applies to each test. If someone says that, you can safely disregard everything else they say. Here you can find a more complete list of conversion of PTV to DCOF. 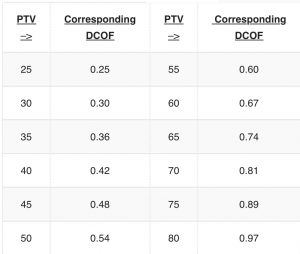