The American National Standards Institute (ANSI) has three pedestrian floor friction standards involving tests using the BOT-3000E digital tribometer, intended for testing flooring for indoor use. Why do they have three standards, and what’s the difference between them? They all have different test methods and different minimum coefficient of friction values (0.42, 0.43, and 0.60).

All three test methods are suposedly used to assess safety of indoor flooring that will be used while wet. However, each test method uses a slightly different wetting liquid, and none are sufficient for assessing safety.

The first standard passed by ANSI was B101.1. It involves measurement of static coefficient of friction (SCOF) and the wetting liquid is purified water. Static friction simulates a pedestrian who is standing still, and despite long tradition of using it in the U.S., it is now thoroughly discredited and virtually useless for assessing safety, and should be ignored for wet testing. Despite widespread misinformation, wet static friction is not endorsed for assessing safety by ADA, OSHA, the International Building Code, Tile Council of North America, Ceramic Tile Institute of America, or any other significant safety-related organization. Static testing in the dry condition, however, can be useful in the field to see if dust, grease or dried soap build-up (for instance) is causing problems for slip resistance.

The second standard is ANSI B101.3. It involves measuring dynamic coefficient of friction (DCOF) using a trace of wetting agent (sodium lauryl sulfate, or SLS, an ingredient in many detergents) in the water used for the testing. The standard establishes a minimum DCOF of “greater than 0.42” for level floors. This safety criterion is derived from research at the University of Wuppertal using human subjects walking down a variable-angle ramp in comparison with BOT-3000 (a previous version of the newer BOT-3000E) tests using the B101.3 wetting agent concentration.

The third and most recent standard is A137.1. It was written by Tile Council of North America and is now incorporated by reference in the 2012 International Building Code. The safety standard for ceramic tile on a level surface is 0.42 or higher. (Note a subtle difference between the last two safety standards: one is “0.42 or greater,” while the other is “greater than 0.42,” meaning 0.43 or greater.) 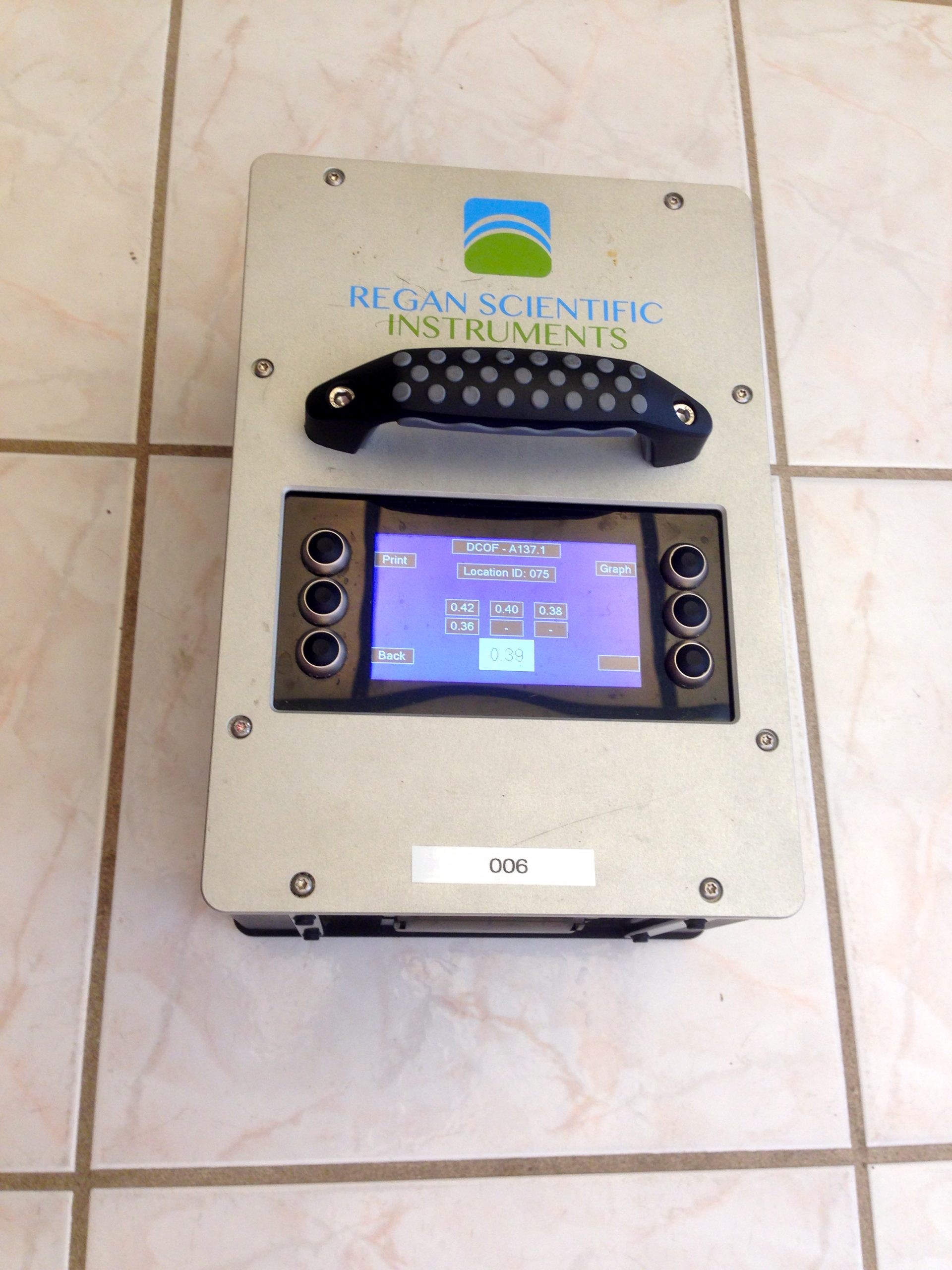 Tile Council of North America devised the A137.1 test method. (A brief version of it is called AcuTest.) It specifies a wetting agent (SLS) concentration that is half that used for B101.3. The only justification for this apparently is that the pass-fail test results correlate rather well with the now-discredited static coefficient of friction test minimum of 0.60 used for ASTM C1028.

Another difference is that the test foot rubber is reconditioned after every four runs in A137.1 versus every six runs for B101.3. The first test run result after reconditioning the test foot can be quite a bit higher than the succeeding runs, so that this biases the DCOF even higher.

The much lower wetting agent concentration, plus the more frequent reconditioning of the test slider, often result in a significantly higher result on the same flooring when using A137.1 in comparison with B101.3, the latter giving the lower result. The bottom line is that many tiles that fail to meet the minimum in B101.3 can meet the minimum in ANSI/NFSI A137.1.

Also, there is often a very high reading during the first run on the tile after reconditioning the slider. In B101.3, this very high reading must often be thrown out when calculating the average since all test readings must be within 10% of the average reading after the six runs in according to the B101.3 test method. In A137.1, this very high reading is simply kept. For instance, on some samples, you may get the readings of 0.52, 0.42, 0.42, 0.41, 0.41, 0.40, and 0.40. To get the average result for B101.3, we would throw out the first reading which is more than 10% above the overall average — so the remaining six readings would give us an average of 0.41, which is below the safety criterion of 0.43 or greater. Using A137.1, we keep the first reading (for no apparent reason) and only count four readings — so the average reading here would be 0.44, which is above the safety criterion.

Although ANSI A137.1 is for ceramic tile, the same safety standard should not be applied to other hard materials such as polished concrete, natural stone, terrazzo, etc. More research would need to be done on those materials.

Safety Direct America can conduct all three of the ANSI slip tests, plus the pendulum test that gives a more definitive assessment of safety in more than 30 specific indoor and outdoor flooring applications (pool deck, rest room, loading dock, etc.). The pendulum is the floor slip resistance test instrument used in over 50 nations for assessing safety, and has been endorsed by the Ceramic Tile Institute of America since 2001.