The minimum safety standard for coefficient of friction for a pedestrian ramp should depend on the angle of the ramp and the weight of the separate load (shopping cart, wheelchair, gurney, etc.), if any, the pedestrian is controlling. However, that’s not how American safety standards are written. 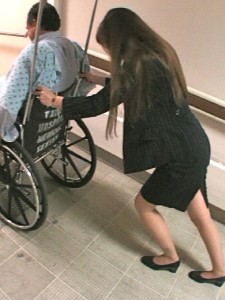 In the USA, traditionally safety standards for slip resistance (or coefficient of friction, COF) of pedestrian ramps have had only one minimum value (e.g. 0.80 or 0.46, depending on the standard and whether it specified static or dynamic friction). This applied regardless of the slope of the ramp or what the ramp was used for. This is in the interest of simplicity, but it is contrary to common sense and the laws of physics.

A “ramp” as defined by the Americans with Disabilities Act (ADA) can vary from a shallow slope of 1:20 (2.86 degrees) to a steeper 1:8 (7.12 degrees). The latter, of course, needs a higher coefficient of friction to be safe. Also, if the ramp is to be used for loads not carried by the feet, it needs higher friction. That’s because under the definition of coefficient of friction, the friction force is proportional to the weight on the feet. That is, a 220-pound person gets twice as much friction as a 110-pound person. If in addition there’s weight not borne by the feet — for instance, when a 100-pound nurse is pushing a wheelchair and patient totaling 250 pounds — the COF needs to be higher to prevent slipping.

A paper by Sotter et al. in the Proceedings of the XIX Annual International Occupational Ergonomics and Safety Conference analyzes the static coefficient of friction needed for safety on a ramp.

The photo at right shows hospital laundry going downslope and being controlled by a near-horizontal force. 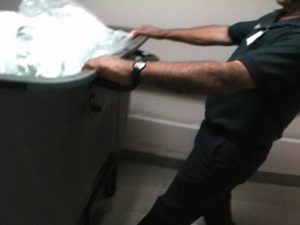 When the pedestrian is exerting a force upward, e.g. pulling a pallet jack, a lower COF will suffice because some of the weight of the load is transferred to the pedestrian’s feet by the upward pull. For more details, please see the paper.