The Americans with Disabilities Act (ADA) requires that floors accessible to disabled persons be “slip-resistant”, but does not define what that means. Apparently it’s up to property owners and the courts to decide. But there is a reliable way of assessing slip resistance that is recognized the world over to help comply with ADA slip resistance guidelines. That’s the pendulum DCOF test, which has a peer-reviewed, published test method in at least 50 nations on five continents, and has been in continuous use for over 50 years now. Revised in 2022 to include the slip resistance testing of floors as well as road surfaces, ASTM E303-22 is now America’s best way of assessing slip resistance for ADA requirements based on real-world slip and fall research from around the world.

Modern knowledge indicates that dynamic coefficient of friction (DCOF), which applies to moving pedestrians, should be used as opposed to static coefficient of friction (SCOF), which applies to persons standing still. Usually the relevant condition is when the surface is wet or otherwise lubricated, as no slip accidents occur when someone is standing still (static) on a clean and dry floor. It’s just simply not possible for a slip to occur under such conditions based on common sense. Someone can fall over while standing still on a clean and dry floor after too many shots of tequila, but slipping is not possible while standing still.

Therefore, using static coefficient of friction (SCOF) testing methods to determine if a floor is “slip resistant” for ADA compliance, such as is used in UL 410, ASTM D2047 and ANSI/NFSI B101.1, is completely irrelevant at best, and potentially purposefully misleading and fraudulent at worst. These tests are used today to help sell slippery flooring with bogus test data created by unscrupulous “slip resistance test labs”, not to assess real-world slip resistance based on any kind of peer-reviewed or relevant slip and fall research or slip test methods.

The Occupational Health and Safety Administration (OSHA) in a nonmandatory appendix to a proposed rule published in 1990, helped create some of the misinformation around slip resistance testing for ADA compliance. They said that the ADA pointed toward using 0.50 as an acceptable SCOF value, but then the ADA in a letter to Safety Direct America’s George Sotter denied ever having endorsed this. Now OSHA says, “OSHA does not have any standards that mandate a particular COF for walking/working surfaces.” And the ADA just says to make the flooring “slip resistant”, and offers no further guidance.

There are many alleged ways of testing for dynamic slip resistance, and usually no two tribometers (slip resistance test instruments) give the same numerical answer, as the test methods vary widely in various ways. Therefore, safety minimums for dynamic coefficient of friction, e.g., 0.50 or 0.35 or 0.42, etc., also depend on the test method used. There is no “universal” DCOF value that means a flooring is slip resistant to meet ADA slip resistance guidelines. The safety criterion value for each instrument, or the value that is considered “low slip potential” or “slip resistant”, will be different for each test method and test device, hopefully based on many years of international research in to real-world slips and falls.

Anyone who claims there is a “universally-accepted value” for slip resistance, no matter which tester is used, should be considered highly misinformed, and someone who has a profound misunderstanding of how real science works. Full-time American slip and fall “expert” witnesses who use the English XL often spout the misinformed idea that 0.50 is considered “universally accepted as slip resistant”, but that just shows their lack of knowledge in the area of science and tribometry. After all, full-time slip and fall “experts” are paid to help win lawsuits, not provide sound scientific data to help building owners meet ADA slip resistance compliance. 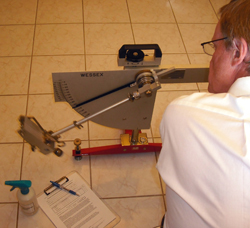 Our observation over decades of testing indicates that the only reliable method of testing to meet the ADA slip resistance guidelines, in use since 1971, is the pendulum DCOF slip resistance test method, which is the subject of ASTM E303-22, as well as other standards used in more than 50 nations, such as BS EN 16165, AS 4586, BS 7976, IRC 35 2015, AS 4663, TS 15676, SI 2279, and numerous others. The test method yields a Pendulum Test Value (PTV), Slip Resistance Value (SRV) or British Pendulum Number (BPN), depending on which country’s test method you’re using, that can range from near-zero to 100+. Higher Pendulum Test Values indicate greater slip resistance. There is no established upper limit, because even people who drag their feet when walking can traverse a highly slip-resistant sidewalk, road, or parking lot. The idea that a floor can be too slip resistant for ADA slip resistance compliance is misinformed.

Safety criteria can vary for different conditions, e.g., relatively low slip resistance is required for normally dry surfaces like shopping center canned-goods aisles (e.g. a wet PTV of 15), to high slip resistance for communal shower rooms (PTV of 45) or external ramps with slopes steeper than 1 in 14 (4.1 degrees), a wet PTV of 55.

In the USA, in addition to knowing the PTV, it is often advantageous in litigation to know that the dynamic coefficient of friction (DCOF) measured using test method ANSI A326.3 exceeds 0.42 or 0.55, depending on the circumstances (indoor or outdoor floors that get wet in use). Although this test states on page one that it is not for assessing slip risk, but rather for “comparing surfaces”, it is still a DCOF slip resistance test that is popular presently in the United States, which sets a very low bar for safety in almost all cases. If you can’t “pass” ANSI A326.3, then you surely have a floor that is not slip resistant for ADA purposes. The test results for ANSI A326.3 are therefore good to know. That’s why we have a “Recommended Slip Test Package” that includes both the pendulum ASTM E303-22 and the ANSI A326.3 test results. The latter, conducted using the BOT-3000E digital tribometer, tends to be much more forgiving than the British Pendulum slip resistance test and can indicate a floor is safe even though it’s not.

For more information on ADA slip resistance guidance, contact us for reliable floor slip resistance testing. One huge advantage of pendulum DCOF testing is that there is a harder rubber slider (known as Four S rubber for “Standard Shoe Sole Simulating”) used for pedestrian areas where people will be mainly wearing shoes, and there’s also the option of using a softer rubber slider (known as either TRL rubber, for Transportation and Road Laboratories, or Five S rubber, for “Standard Soft Shoe Sole Simulating”) for barefoot areas and areas where softer-soled shoes such as running shoes are primarily worn. Both rubbers have been testing floors around the world for decades to assess real-world slip resistance to help put a stop to avoidable slip and fall accidents.