The National Safety Council’s (NSC) latest published statistics show that falls are causing 28,000 deaths in the USA annually (see p. 19 of their report). This is the equivalent of a 9/11/2001 attack every six weeks, all year long. Moreover, falls deaths are approaching motor-vehicle deaths. Safety Direct America offers products and services that can prevent slips and falls.

Road deaths have been decreasing as vehicles add more safety features, such as side air bags, collision warning systems, automatic brakes, and improved crash test and rollover test results. Legendary investor Warren Buffett worries that self-driving cars will eventually reduce accidents enough to devastate the profits of some of his insurance company investments. (Accidents are good for the insurance industry as long as they are predictable enough to incorporate into each client’s premiums.) Safety features have decreased fatalities enough to more than make up for increased cellphone use (conversations and texting), which is involved in 26 percent of crashes.

On the other hand, fall deaths are increasing largely because Americans are getting older. Older people are more susceptible to falls, and less likely to recover from their injuries. Osteoporosis can cause brittle bones that shatter on impact, requiring surgery — with infection sometimes a side effect. Hip replacements too often set off a downward spiral that results in premature death within a year after the fall. About 84 percent of falls deaths are people over 65 (p. 62, NSC). These falls are more often in commercial spaces than in the workplace. Lest we blame the victim, remember that many of the elderly are protected by the Americans with Disabilities Act (ADA). An individual with a disability is defined by the ADA as a person who has a physical or mental impairment that substantially limits one or more major life activities, a person who has a history or record of such an impairment, or a person who is perceived by others as having such an impairment. The ADA does not specifically name all of the impairments that are covered.

The NSC graph below shows the deaths trends. (Click on the graph to see it at larger size.) Poisonings, including those from unintentional opioid prescription painkiller, heroin and cocaine overdoses, are also a major and increasing cause of deaths that affect the young and middle-aged more than seniors. Homicides (not shown) get lots of headlines and television dramas, but falls cause nearly twice as many deaths (p. 86 of the NSC report). 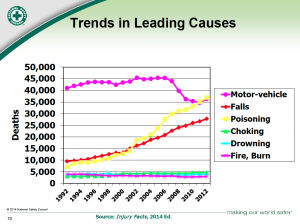 The NSC’s statistics also show falls as by far the leading cause of medically consulted nonfatal injuries: 13,000,000 in the most recent year reported, accounting for 35 percent of the injuries. This is an average of 17,800 injuries that need treatment to Americans from falls every day. 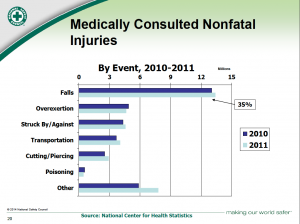 The 2012 International Building Code (IBC), by reference to ANSI A137.1, requires a minimum wet dynamic coefficient of 0.42 of friction for level indoor flooring that gets wet in use, but does not define what a safe level is — it only says that many other factors need to be considered. (The test is conducted using the BOT-3000E tribometer.) We fill that gap by using detailed, accepted situation-specific standards that are tailored to everything from outdoor steep ramps to swimming pool decks to hospital bathrooms. There is no useful “one size fits all” safety standard for non-slip flooring.