As if San Juan and the rest of Puerto Rico didn’t have enough economic and hurricane-damage problems, some of the streets of San Juan are paved with blue 18th-century cobblestones that are very slippery when wet. In November 2017, a cruise passenger from the mainland USA fell and broke his arm (despite being warned about the hazard several times by a guide) the day his cruise was to start. He got minimal medical attention so he wouldn’t miss the cruise, and spent ten days cruising with his arm in a sling, sleeping sitting up.

The cobblestones were made using waste from iron smelting in Europe and came to San Juan as ballast. They were first used as pavers in 1784, and Calle Cristo, the first cobblestone-paved street in the Americas, still survives. Even the most careful pedestrians are at risk of slip-induced injuries when it rains. The cobblestones are slowly being replaced. 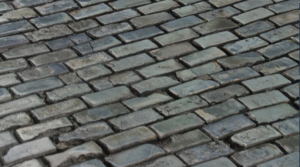 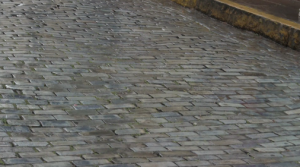